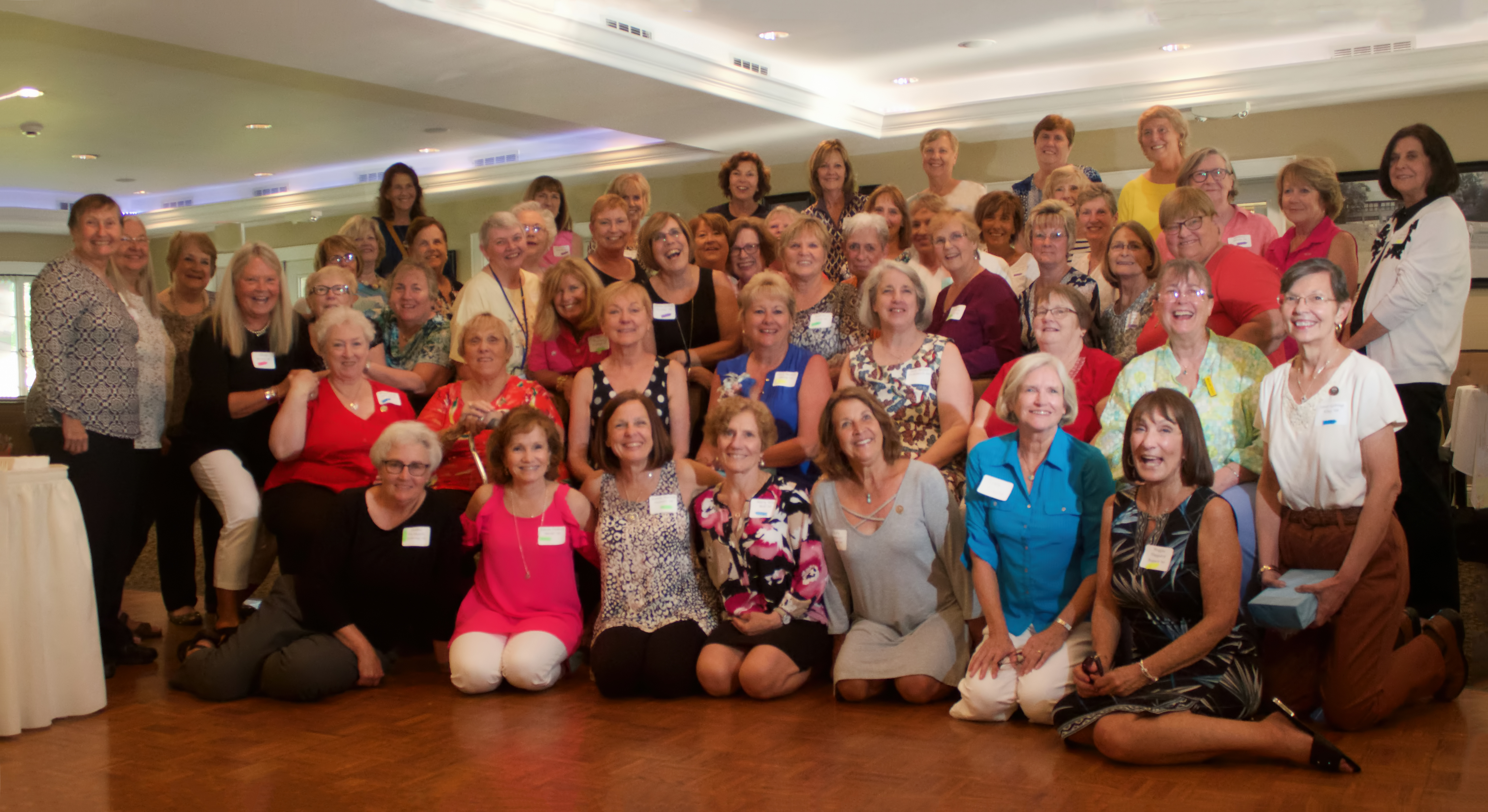 Message from MaryAnnRS - our group shot creator.
Thanks so much for all your effort on this photo!

Synopsis: Group shot done, here is a copy of it in a form people can just look at on their computers, and another copy arranged to be printed out 8X10. If anyone wants a 5x7 copy I will have to re-arrange the shot so that no one is cut off on the edges, so just let me know. People can feel free to email me with a request at: mradikesmith@hotmail.com

The reunion was wonderful. It was so amazing to see all those women, all so strong and intelligent and beautiful.

The work you did in getting us all together, and to include everyone, was superb. I worked on it for three nights. It was a very, um, unruly group of girls! Almost no one stayed in the same position throughout all the shots.

There are three people who only partly show... Barb Rekers, Charlene Eling, and Theresa Neumann. I searched through all the shots, and chose the image where the most of them shows. Poor Theresa Neumann doesn't show very much of her face in any of the shots, so I chose the one where we can at least see her eyes and nose and not just her hair and forehead! So I went through and chose each person's best image, and put them all together in one image, so that no one is frowning, and no one has their eyes closed etc. Some people didn't smile for any of the shots, so I chose what I thought looked best for those ladies.

It drove me crazy, trying to get everyone in. The worst was Elizabeth Collins. She did not show anything but her hair in ALL the shots. But I found one shot from while the group was still getting themselves together, where her face showed. So I took her face and stuck it in between Charlene Eling and Sue Thornton.... and then I erased her other image (which was the top of her head and some hair on one side sticking out on Sue Thornton's left side).... but I couldn't erase her shoulder which was in front of whomever that is on Elizabeths left, because I didn't have a photo of that woman's chest to replace Elizabeth's shoulder with. So if you really examine Elizabeth, it looks like she has really broad shoulders or something. My choices were either not showing her face at all, or distorting her, so I chose the distortion. Everyone will want to see at least part of their face.

This would have all been much much better if I had been out in front, taking the shots. I would have seen, then, that someone wasn't showing, and would have fixed it.  Oh well. If Betty Collins doesn't like the distortion, I can send her a copy of the non-distorted shot, but then she won't be visible. I think I fixed all the mistakes which are inevitable when assembling a group, like this. For instance... sometimes someone would just have half an arm, or their hair was chopped on one side, and I would have to fix it. I examined each person carefully and I think I caught all the mistakes. Getting a group shot where everyone is actually looking pretty good is incredibly difficult and time consuming!

MARY ANN, you did a fantastic job, thanks so much!!!
​