Follow Up from HermanR, who shares two old photo from the family's Osterhues Bakery in Reading. Herman writes, " I am a grandson of Bernard who ran the bakery until the early 70s when my uncle by the same name continued the business." In a separate email, Herman sent the following...

Photo (below left) of Herman's mother and a customer in the bakery.
"Osterhues Bakery Stop" sign (below right). Hung in the window of a house when they wanted the home delivery folks to stop. (I) found in the attic of an old house in Reading." 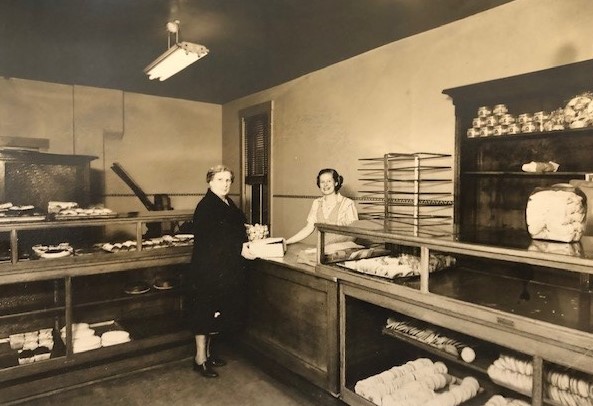 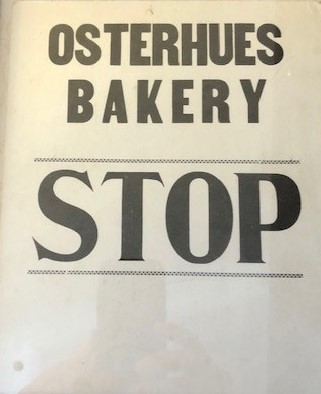 To fully understand how the two Reading Bakeries of my youth came into existence I did a little research on the individuals who established them. After consulting friends and the Reading Historical Society, I dug a little deeper into the lives of Frank Osterhues and Bernhard & Mary Lampe. I am surprised at my findings. First of all, I made an incorrect assumption that they were likely the sons/daughters of German immigrants who came to the Cincinnati area in the first wave of immigration. Both Osterhues and Lampe came much later (and Mary was born in the US). Frank Osterhues arrived in 1929, between the wars, and Bernhard Lampe, after WWII. From my brief research it appears that Osterhues came with other family members in hopes of a better financial environment for his business aspiration. In Germany, punished with WWI reparations, one U.S. dollar was equal to about 4.2 trillion marks. It was cheaper to use paper money as stove fuel, wallpaper, and children’s toys (pictured below) than it was to actually purchase those things with the money. (See photos below, Source: Time). 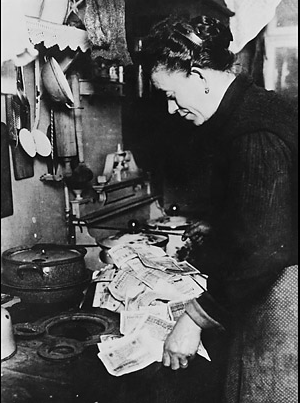 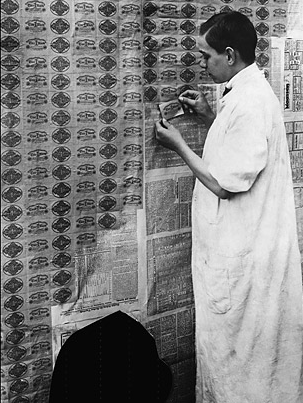 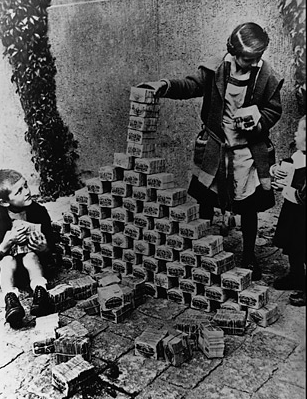 The photos above were taken in the mid 1920s. The economy in Germany is in total collapse by the late twenties. Frank, born in 1908, likely saw a bleak future for himself as Germany sunk into chaos starting with The Beer Hall Putsch in 1923 to the rise of Hitler starting in 1928. Frank immigrated in 1927, a year before the Nazi's won their first 12 seats in the Reichstag. What may have motivated Frank to immigrate? Very likely either economic opportunities or the draft. In Frank's case, it may have been both since he turned 19 in 1927, the year of his immigration. Frank immigrated from the northwestern region of Germany, an area where many Cincinnati-NKY American-flavored Germans originated. Records show that in 1930 Frank is boarding with Frank Bohrers on Harrison Avenue in Cheviot whose family had immigrated from Oldenburg. Frank's obituary (see below) states he came from Osterfeine, yet his 1944 draft card (also below) shows Oldenburg (where my husband's family is from and where Ed Oltmann, who owned Wyoming Bakery, also grew up (CLICK HERE to read about ED and his bakery).

Frank became a very successful business man. No only did he open his bakery in Reading but as you can see in his obituary he owned a bakery in Cheviot and then opened a grocery store in 1948. Research shows he married at the age of 26. The 1940 census has him living with his wife and two small children above the West Benson bakery. He obviously knew a Lampe family in the area as I found a record that he purchased property from them 1948 (see below). Charles and Stella Lampe may have been related to Bernhard Lampe, who established Lampe's Bakery with his wife Mary (nee Hegener) but after researching, I could find no link.

While we can know that Osterhues bakery likely opened sometime in the 1930s, there is no definite date to share. I have no recollection of being in the Osterhues bakery but I certainly recall the wonderful donuts and delights of the truck sitting at the parking lot of the old OLSH school, at the corner of Columbia & Reading Rd, each 1st Friday of the month when we were allowed to receive communion with a Osterhues donut and carton of milk at our desks after Mass. I am unable to remember the type of goodie I purchased but I do recall the sweet, wonder aroma of the inside of that truck as I picked out my breakfast treat. Since I had little time to dig deeper into the bakeries history, I am currently unsure when Osterhues' in Reading closed. I promise to continue the search and update this sight periodically.

I thought Lampe's Bakery may have been established by someone in the Charles & Stella Lampe's family, but again, like my assumptions of Frank Osterhues, I am completely wrong! According to the obituary of Mary Lampe (see below), she opened Lampe's with her husband, Bernhard Gunter Lampe. Much to my surprise, Bernhard immigrated on 9/4/1945, right on the heels of WWII (see his naturalization papers below). I am unable to share when Lampe's opened or closed their shop, although there are Lampe's bakery newspaper advertisements in 1999. I am assuming under new ownership.

According to my friend, Jane, she worked at Lampe's for three years in high school, this would have been between 1965-1968 or there abouts. My brother, Joe, who delivered newspaper bundles to the bakery recalls eating hot, fresh donuts after the papers deliveries at 5:30 each morning. Joe graduated from high school in the early 1980s, so the bakery is memorable during those years. Mary Lampe died in March of 2020, so it is hard to know if or when the bakery was sold and to whom.

My memories of Lampe's are deep and delicious. My mother would take us at least once a week through the 1950s and early 1960s. I would always purchase a creamed filled donut with chocolate icing. My mother always selected a jelly donut. In 1963, our family became loyal customers of Servatii's bakery in Hyde Park. I am unsure why the change of allegiance. Did Lampe's change ownership during this time or is it that my father simply loved Servatii's Italian bread at first taste the year they opened? (CLICK HERE to read the history of Servatii's Bakery, another beautiful story of German-American immigrants).

Mary Ann Lampe (nee Hegener) beloved wife of the late Bernard G. Lampe. Loving mother of Bernard “Ben” (Tami) Lampe Sr. and Margaret “Margie” (Ashraf) Lampe. Caring grandmother of Abigail “Abby”, Bernard “Bernie” Jr., and Adam. Sister of Alfred Hegener and the late Robert (Helen) Hegener, Helen (Tom) Kolde and John Hegener. Mary Ann learned at an early age to be of service to her family and to be humble and quiet about her impressive intelligence. She graduated salutatorian of her high school, had an impressive job at Proctor and Gamble. She met a handsome German immigrant and together they launched a successful business (Lampe’s Bakery) and operated a farm. Mary Ann put her parents and children first-always preparing for rainy days. Mary Ann deeply loved and was a constant support for her two children and she loved their spouses as her own children. Her three grandchildren brought her great joy and she lives on in them. She was a great heart, mind and spirit and will be deeply loved forever. Mary Ann passed away March 11, 2020 at the age of 74. 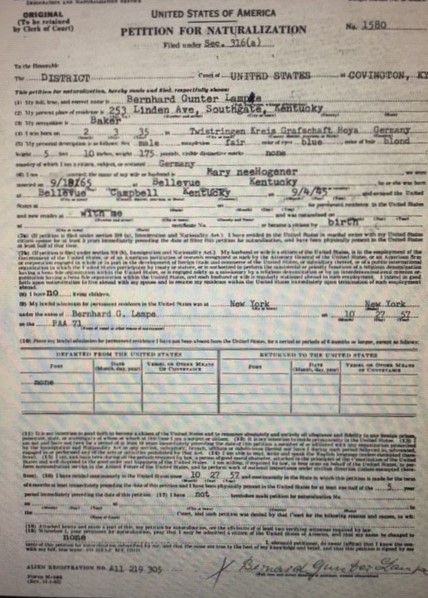 So, we know Osterhues and Lampe's were two German-American flavored bakeries. They created many delicious memories now baked into our memories. We may never know all the details of their history. I am sure there are Osterhues and Lampe descendents who know the whole story, and wouldn't it be fun to learn about how it all came about? Please share your delicious memories of these two fine bakeries and share any history you may know of their existence.